Truth be told, as much as I fantasize about copping a persona like Tom Waits,  I’m a middle class kid from suburbia. I like to say I’m from the Hudson Valley; it sounds cooler. I AM from the Hudson Valley, just not quite far enough away from Manhattan to really be upstate; though my cousins from Brooklyn always thought so. 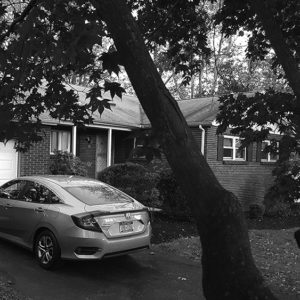 The house I grew up in

Here was the soundscape of my upbringing: Simon & Garfunkel, Broadway shows (West Side Story, Pippin, Fiddler on the Roof …), 40’s Swing, mostly Benny Goodman (thanks, dad). These were the records in my house when I was too young to have opinions. Milt Okun’s Great Songs of the 60’s lived on top of the piano and was the go-to sheet music. I may have only been 7 when that decade ended, but the influence of that popular music has been cemented to this day.  Then I discovered Neil Young, Led Zeppelin, Yes. Later there would be Miles Davis, Coltrane, Talking Heads. Of course, today, the full list is vast and genres many. 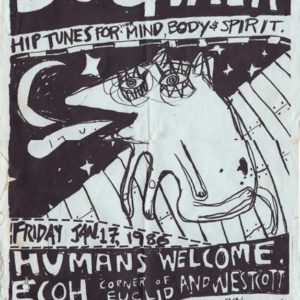 A very early poster from the incomparable Jim McShea

After College, with Jim McShea, and Mike Lowery, I formed Dogtalk. In retrospect it was kind of an opportunity to mash up all these influences. We had some local success in Syracuse N.Y. and later in the S.F. Bay area where we caught the end of the roadhouse scene a couple of years before the dotcom boom and the ensuing demise of the live music landscape.

I stuck around through the 90’s after we disbanded, trying to put a variety of other projects together. A bit lost, really, until I met Leyna d’Ancona. A woman brilliant, kind, beautiful and uniquely capable with a myriad of things.  Not the least of which was holding me tight as I finally grieved the unexpected passing of my father fifteen years earlier.  So found was I that we married and had kids. And moved back east. After years doing Graphic design and Web Production as a day job, I found myself in education and began teaching music and audio production at a private High School. Who knew I would be asked to be the voice of the man eating plant in their production of Little Shop of Horrors, and my creative life would take an unexpected turn. (More of that in future posts.)

After some years in the shires of Vermont, we’re back on the west coast. Back where my words and music were my daily focus. Back, not as a young man trying to make it in the 1990’s music scene, but as a father, husband, and writer, with a few new tricks up his sleeve and ideas under his belt.

That’s it in a nutshell. You won’t have learned a damn bit about my art or my process or what have you. Nothing about my politics. Have I kvelled (hyperlinked for the yiddishly challenged) over my kids? Nope, not here. I’ll share those things in due time. I’m only on my first cup of coffee…